2016, what a year! I know that for many, including celebrities, it hasn’t been the best of years. We lost quite a few along the way. However, I'll try to put a positive spin as I look back through 2016. I like to do this because it sets the tone for 2017, the year to come. So, this is my retrospective on 2016, a year that has been incredible for me, from many perspectives. I've included both my failures and successes as I hold myself accountable to my promises.

My primary goal was to intensify my efforts and professional training in 2016. I wanted to grow and gain new and bolder experiences. I wanted to continue my public speaking and involvement in the open source community. I did not set hard targets but with a good track record from 2015, I knew where I was headed. Let’s see how it all went.

It's been a very busy year but this is not an excuse for dropping my gym attendance to almost nothing. Some of the most successful people out there know that a healthy body is a prerequisite for a healthy mind and a successful career. I dropped the ball on this and I plan on fixing it going forward. The biggest challenge for me has been the constant travel and the change of schedule. To address this, I'm gonna try to take advantage of the hotel amenities (gym, pool etc) and if there's none available, I could do some plyometric exercises in the room or go for long walks. Where there’s will there’s a way…

No, I'm not talking about technical books here. I do plenty of technical reading. I’m talking about reading books for leisure. Again, as with the gym, the problem is time or the lack of it to be more precise. You would assume that with so much traveling I would have plenty of time for reading but it turns out that most of my time is taken by work, emails and training for upcoming engagements (more on this later).

These are the 2 soft targets I had set up at the beginning of the year and, as you can see, I missed both.

The year started with a big bang when, on the 1st of January 2016, I received my MVP award. I would like to thank Martin Beeby and the rest of the Microsoft DX (Developer Experience) team for putting me forward and supporting me through this. It was the best birthday present I received (my wife and kids excluded) and it helped reinforce my commitment to helping the community and working in OSS. I was humbled and proud to be part of the MVP community and I had big plans for the MVP annual meeting which takes place every year around November in the US. But it never happened (it was for a good reason)

One of my talks was accepted at NDC London. It was a lightning talk but it still felt like a massive accomplishment. I got access to the full conference, although due to work commitments I was only able to attend for 1 day and I had the opportunity to speak about OSS, which is one of my favorite subjects. It's also my most popular talk as I've given this many times in the past 2 years and it truly resonates with most developers. While at NDC, I got to meet with the Microsoft DX team, got an offer to work with Pluralsight to create a course, met Troy Hunt, Scott Hanselman, Hadi Hariri, Rob Conery and a ton of other people I really look up and admire. It's a great experience sitting in the same room with these speakers and geeking it out. I would highly recommend it. Every single one of them had something different to offer and I thoroughly enjoyed my short attendance. FYI, I've managed to get invited again this year at NDC London 2017. At least this time I'm not going against Troy Hunt, who last time managed to pinch all my attendees and rightfully so :)

Speaking at many other prestigious events

I feel bad for singling out NDC when I was invited to speak to so many other conferences throughout the year. Israel, Canada and Netherlands are only a few of the countries I visited while attending conferences. And every single one of them was a great opportunity to share my experiences, make new friends and expand my network. In one of them I was offered a job which I almost took, had it not been for the next accomplishment below.

Getting my dream job at Microsoft

In March 2016, I joined Microsoft to work as a Senior Azure Developer Premier Field Engineer. I know; a proper mouthful. I will blog about this very soon as many people have asked me about my experience within the team and about my actual role. I strongly believe that me getting my dream job was the result of the substantial personal and professional investment I made over the past few years. Being a PFE is truly a dream come true and I'm very fortunate to be in such a pivotal team among very competent, clever and driven colleagues. This was my professional highlight of the year.

Although nowhere near as engaged as 2015, I still managed to work with the community through conferences and user groups, blogging, webcasts and podcasts. On average I did 2 conferences/User Groups per month even after I joined Microsoft. I also continued to blog and work on open source projects. Some of these projects were both internal (Microsoft) and external (community driven). I will admit that I had to take it down quite a few notches due to the limited amount of free time and also the fact that I have a team, manager and customers that also demand my attention. Consequently, I need to be more selective with my public engagements to ensure that my work doesn’t suffer.

I wrote a [blog post](https://cmatskas.com/being-a-guest-at-the-net-rocks-podcast/" target="_blank) about it a couple of weeks ago and it still feels surreal that I was invited to speak at .NET Rocks. I reached out over a year ago to ask Richard and Carl whether it would be a possibility to be a guest and they politely turned me down. They were right at the time since I didn’t have much to say. I vowed to work on that and then I totally forgot about it, exactly in the same way I forgot about becoming an MVP. In the beginning of December, the .NET Rocks duo reached out to me to ask me to be a guest and discuss about my current role at Microsoft and the work we do as PFEs. The interview is due to air on the 11th of January 2017 and it was a great experience. Hopefully, this will be the first of many as I would love to feature in more podcasts, if anyone would like to have me :)

The year in numbers

Unlike previous years where I was focused on contracts signed and projects delivered, this year my work role has changed significantly to helping developers, teams and companies make the best of Microsoft (but not limited to) tools, technologies and of course, Azure. All in all, in the 9 months I’ve been in this role, I had over 40 different engagements and a full calendar. These 40 engagements were unique, different and challenging in their own way but, overall, a great opportunity to learn and grow. 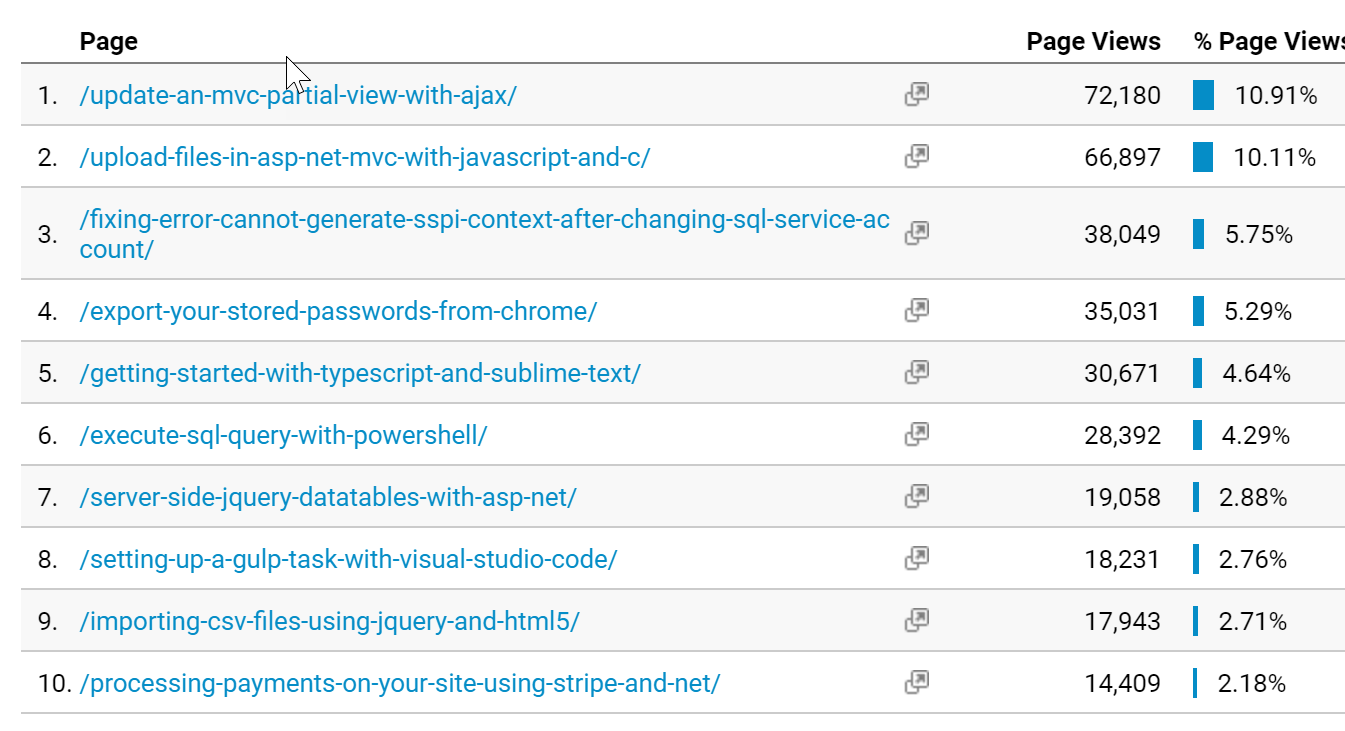 I did my best to blog as often as possible but there were a couple of months (especially after I joined MS) that I published nothing due to lack of time or getting my hands dirty with any code. This is getting much better now as I start to balance out work and life.

TRAVELING
A very large portion of my year was spent traveling, mainly domestic. The nature of my role means that I need to be on client sites for most of the training, deliveries and talks we give as PFEs. In this year, I did more travelling than rest of my life combined. Let the number speak:

This are a lot of miles and days away from home! This is probably the only negative by-product of my work and public engagements. However, I’ve learned to go with the flow instead of fighting it and plan my travel smarter in order to be spent less time away from family. Fighting has to do with all the things that can go wrong while traveling. Statistically speaking, the more you travel, the more chances there are for things to go wrong, such as cancellations, changes, illnesses, emergencies etc. I make the most of my time while traveling which means that I take full advantage of my time when at home. I also try to book my time away in clusters in order to reduce the round trips. I’m still new and I’m still learning so I’m sure that by next year I’ll have more tricks up my sleeve.

If I had to thank my wife and kids for “tolerating” and supporting me through 2015, words are not enough to express how I feel about it this year. The reason why I got this job is purely down to my wife who has stepped up to the challenge big time to look after our 2 young daughters will I’m jetting away to customers and meetings most weeks. She’s been amazing and has done a great job in keeping everything in order and staying organized through my erratic and demanding schedule. As we celebrated my birthday together today, I was reminded once again that she’s everything I would have ever wished for!

P.S. Make sure you follow me on Twitter @christosmatskas for more up-to-date news, articles and tips.
Create .gitignore and other hidden files on Windows
Blog Home
List all RBAC permissions for all resources in Azure