Ahhh, the beautiful world of Dependency Injection (DI) trying to find it's way back in ASP.NET WebForms. What is it with me and ASP.NET WebForms lately? Just when I think I left all this behind, more and more work is thrown my way using this technology.

ASP.NET forms has been around for a while and will also be an integral part of "One ASP.NET", so it is not a lost skill after all. I'm currently working on a major migration project bringin a 1.1 ASP.NET website to the 21st century-ish. All the way to .NET 4.0 - no 4.5 I'm afraid due to underlying user infrastructure restrictions. Still, better than nothing!

One of the first tasks was to re-architecture the site and introduce some DI love to make development a bit more robust and certainly more testable - VERY IMPORTANT! Since StructureMap is used on a number of other projects, I was asked to use this for my DI implementation. There are a lot of options when it comes to choose your DI but for this scenario we will focus on StructureMap.

Some initial thoughts on StructureMap:
The framework is powerful and actively maintained. The documentation is adequate but the site is bad to navigate, still remeniscent of early 2000 and the majority of the code samples need to be updated to the latest version. However, with a bit of digging, google/bing you get there eventually...

In this post we will see how to implement DI in your .aspx page and .ascx controls using StructureMap.

Let's start by creating a new ASP.NET website in Visual Studio. Make sure you select the ASP.NET WebForm template and let VS do it's magic. 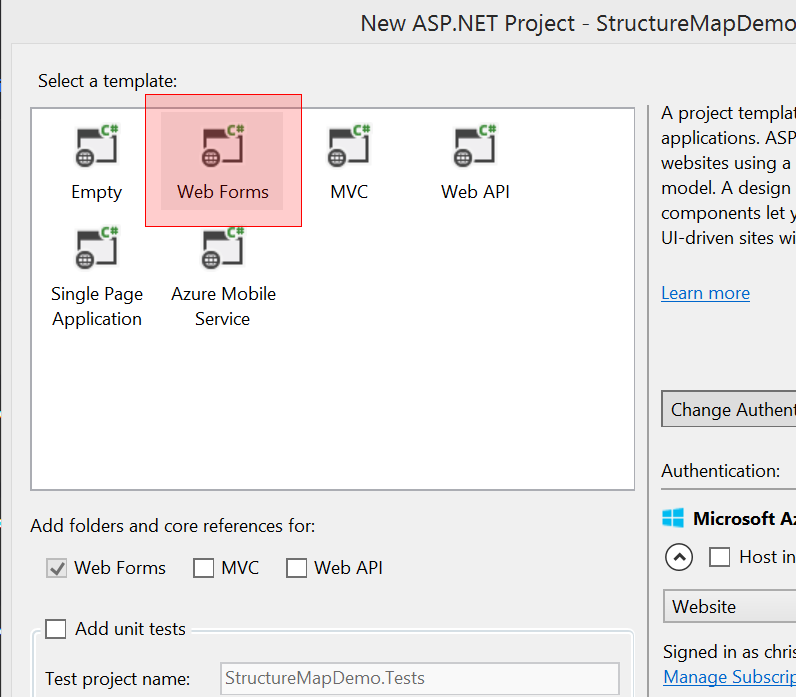 Next, add the StructureMap though NuGet. For a change, we will use the NuGet command line, but you feel free to use the GUI. They both perform the same task:

With StructureMap installed, make sure you test that the site is running before continuing to the next step. Tested? Good, now lets create a simple interface and a concrete class so that we can give StructureMap something to do. Fist the interface:

Then, the concrete class that implements the IEmailService interface:

The ScanningRegistry class inherits from Registry and accomplishes the following:

The last part is very important as it will be the foundation for our .aspx and .ascx dependency injection. This is because .net webforms and user controls don't have a constructor. As such, the only way to automatically resolve objects is through properties, as we will see pretty soon.

With the configuration out of the way, we need a class to create the IoC container and resolve our objects.

In this class, we instantiate a container and we provide a couple of methods for resolving objects. Of special interest are the two last methods: BuildUp() and WhatDoIHave(). An explanation of BuildUp() as taken directly from the StructureMap documentation:

Many times you simply cannot control when an object is going to be created (ASP.Net WebForms), but you may still want to inject dependencies and even primitive values into an already constructed object. To fill this gap, StructureMap 2.5.2+ introduces the "BuildUp()" method on Container and ObjectFactory. BuildUp() works by finding the default Instance for the concrete type passed into the BuildUp() method (or create a new Instance if one does not already exist), then applying any setters from that Instance configuration. At this time, StructureMap does not apply interception inside of BuildUp().

WhatDoIHave() is a simple helper method that return a string with the contents (resolved objects) in the container. Really helpful when troubleshooting

At this stage, you should check that your project builds successfully. If the build is good, we are now at a stage where we can configure our pages with StructureMap. An easy way to do this, is to create a base page that all your pages will derive from. The base page will be responsible for resolving all your dependencies and your pages will remain clean and DRY.

Create a new class and name it BasePageWithIoC. Make the class derive from Page and override the OnInit() method as per below:

Do the same for the user controls, if you have any. Create a class that derives from UserControl and override the OnInit() method as per below:

Let's put all this to practice. Open your Default.aspx.cs class and change the class to inherit from BasePageWithIoC instead of Page. Then add an IEmailService property. Within the Page_Load() method call the SendEmail() method. Optionally, output the results to screen or use the debugger to examine the output. When navigating to this page on your browser, you should get a success result(true) from the SendEmail() method. The page code is attached below:

The sample project can be found on Github, so if you cannot get it to work using the steps above or wish to see the code in action, feel free to jump on Github and have a look.

I hope you've found this helpful and I managed to save you some time/pain. Feel free to leave comments or recommendations on how to make this better.

P.S. Make sure you follow me on Twitter @christosmatskas for more up-to-date news, articles and tips.
Upload files in ASP.NET MVC with JavaScript and C#.
Blog Home
How to use JQuery dialog as Confirm dialog in ASP.NET