It's late(ish) at night, stuck in my hotel due to the Monster Storm Emma that's turned the UK into an icicle and I'm watching TED talks on my laptop when my good friend Brady Gaster, fellow geek/developer/etc, pings me on Skype with a question.

He's got an ASP.NET Core question which I may be able to answer. At least that's what he thinks! So while he's getting ready to ask away I fire open StackOverflow, Google/Bing and https://docs.microsoft.com in hope that I will be able to figure out the answer before he realizes I'm just searching the interwebs.

And that's when he throws a curveball. He asks me excitedly (if you know Brady, then you know he gets easily excited and I don't blame him): we should use LiveShare! Oh, my God! 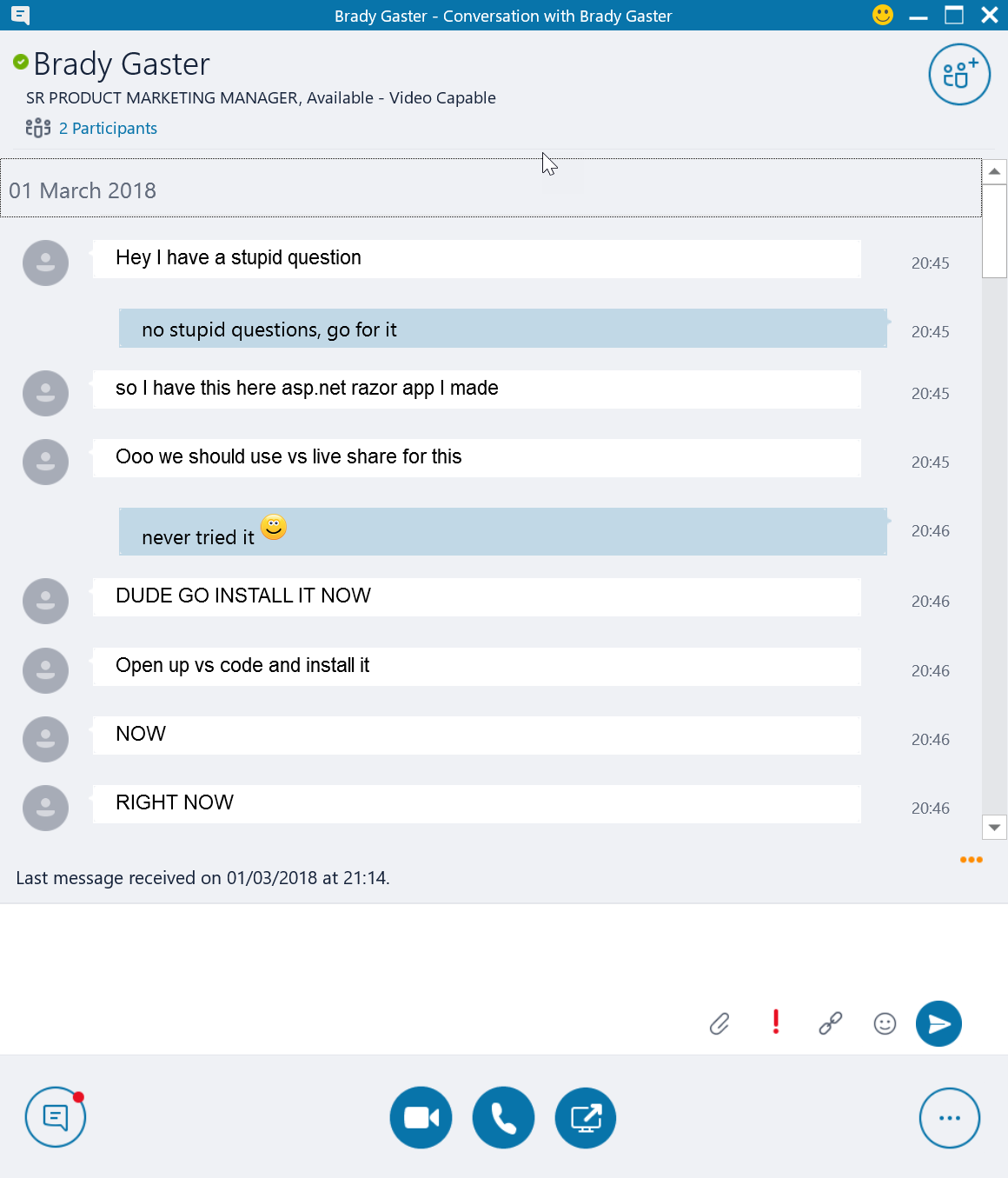 Visual Studio LiveShare is a new Visual Studio (Code included) feature that allows 2 developers from across the world (though they could be lazy and just sit in adjacent offices) to collaborate on code using... magic.

Yeah, that's right - MAGIC. Because, quoting Arthur C Clarke here, " "Any sufficiently advanced technology is indistinguishable from magic.". And although Live Share (more info here ) is still in preview, it works flawlessly! Between Brady asking for help to having a collaborative session up and running it took less than 3 minutes which included the following actions:

The issue that Brady needed help with was really small but it was much easier to solve by looking and interacting directly with the actual code. Unlike previous remote sessions using Skype, this time I didn't have to scream and shout to get Brady to hit the right line of code, I didn't have to share any links to the docs and I didn't have to use the laggy "take over control" feature in Skype to fix the problem. Another reason why sharing a screen may not be desirable is privacy. With LiveShare, we only share our code session inside the code editor, VS or VS Code and I don't have to close every open window.

Finally, I have to talk about efficiency. The Live Share session was smooth and fast even though I was only tethering from my phone. We managed to fix the problem within minutes and I was even able to see Brady launch a debug session to verify the fix!

Once installed, we can see the following Live Share options on the left-hand side of the status bar:

From there we need to login before joining or creating a Live Share session. Alternatively, we can also use the Command Palette to interact with Live Share. WE can access the Command Palette with either Ctrl-Shift-P (Windows) or Cmd+Shift+P (MacOS) key shortcut. To see the list of available Live Share commands, all we hve to do is type Live...

This feature is still in preview and may well change by the time it goes live/GA (maybe at /Build - you know as much as I do). However, I found the whole experience mindblowing. It was easy to install and join a session, it was easy to edit and fix code and it was easy to collaborate with Brady on this project. Hopefully this will be the first of many, especially now that I've proven that I can write a bit of code :)

I strongly believe that this is a game changer and an impressive feature that has a great potential for the developer and open source community. Using Live Share we can reach more developers for training, mentoring and support using the exact same tools that we are so comfortable and fond of. Massive kudos to Amanda Silver and the rest of the Visual Studio teams that worked on this feature.

PS - If you want to take part in the limited private preview, go an fill in this form. GO GO GO, Why are you still here?

P.S. Make sure you follow me on Twitter @christosmatskas for more up-to-date news, articles and tips.
Keeping your Azure Search Index up-to-date with Azure Functions
Blog Home
Configure and use User Secrets in .NET Core 2.0 Console apps in development
comments powered by Disqus